Choosing the right illustrator for a commission is only half the story. Though we may appear to have found the perfect match of visual tone to narrative voice, matching literary and illustrative pace, unless appropriate research is put into the planning stage the final illustrations won’t ring true, lacking the weight of the text. On each commission we go to some lengths to ensure the pictorial details are checked, which  is often a team effort, with illustrator, art director and editor working together, using any specialist knowledge we happen to have, or finding experts outside. Our recent addition to the Margery Allingham crime series, Hide My Eyes, was no exception. The book begins with a bus in a London side street. Although the book was published in 1958 and we think set around the same time, the bus in question is described as ‘vintage’ and was possibly used in the country. We could have eventually guessed at the right kind of bus (thank goodness we have the internet at our fingertips) but we could also easily have been wrong.  This is where an expert comes in. I was very fortunate to have found Dick Gilbert who runs www.classicbuses.co.uk, a website that needs no explanation. Given the scant details in the book, Dick was almost instantaneously able to suggest a few models that we could reference, even helpfully sending reference photos. The book describes 'a vintage petrol-driven vehicle', 'a small closed single-decker of the type still used in remote country districts.  Shabby, but comfortable-looking, its snugness was enhanced by absurd little woollen curtains trimmed with bobbles and draped at small discreet windows.’ (Excerpt from Hide My Eyes.) 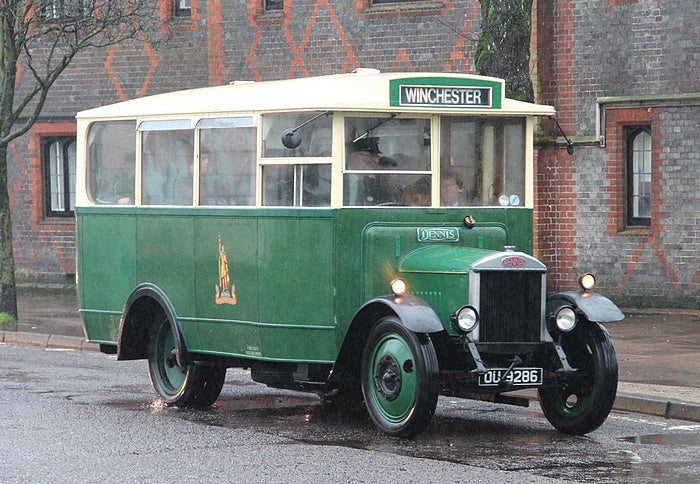 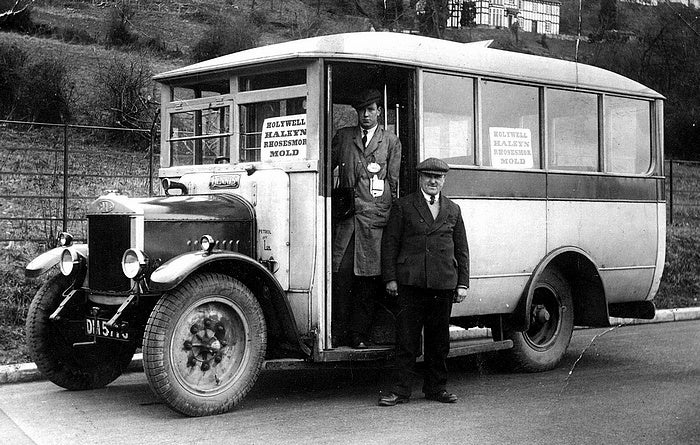 Giving you a little insight into the process, here is an exchange between Dick and I: SG: 'The editor has since pointed out that the bus can only have a rear door for the passengers, "the rear door, by which all passengers must ascend or alight". I assume the text would refer to a side rear door, rather than at the back like a van (where the exhaust would be). To your knowledge do any buses from that period have doors at the very back, like a van?' DG: 'They normally didn't have a rear door, and for a good reason. Usually a passenger would pay the driver for the journey as they boarded the bus, so the door needed to be at the front where the driver was. If you look at the pictures on those links I sent you, you will see that small buses always have doors at the front, and larger ones can have doors at the front or back (or both - and sometimes even the middle!). But, as with every rule, there were some rare exceptions, and here's one from Southdown. This is a Dennis 30 CWT bus from 1927 with a 20-seat body and, although the model was a very popular seller around the country, hardly anybody fitted rear doors. In fact Southdown ordered some more in 1928 but moved the door to the front.' 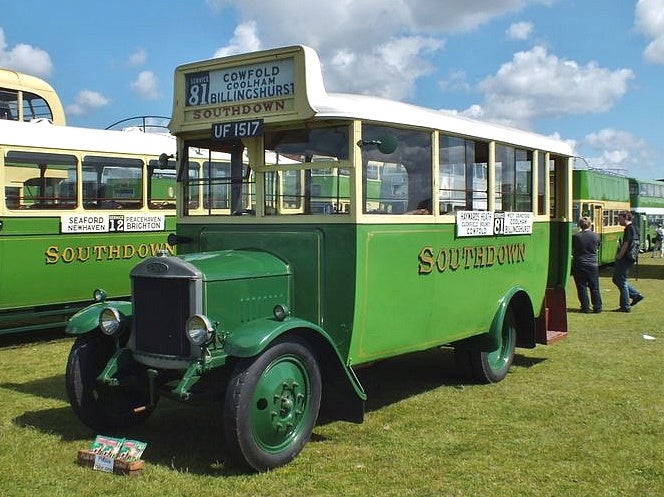 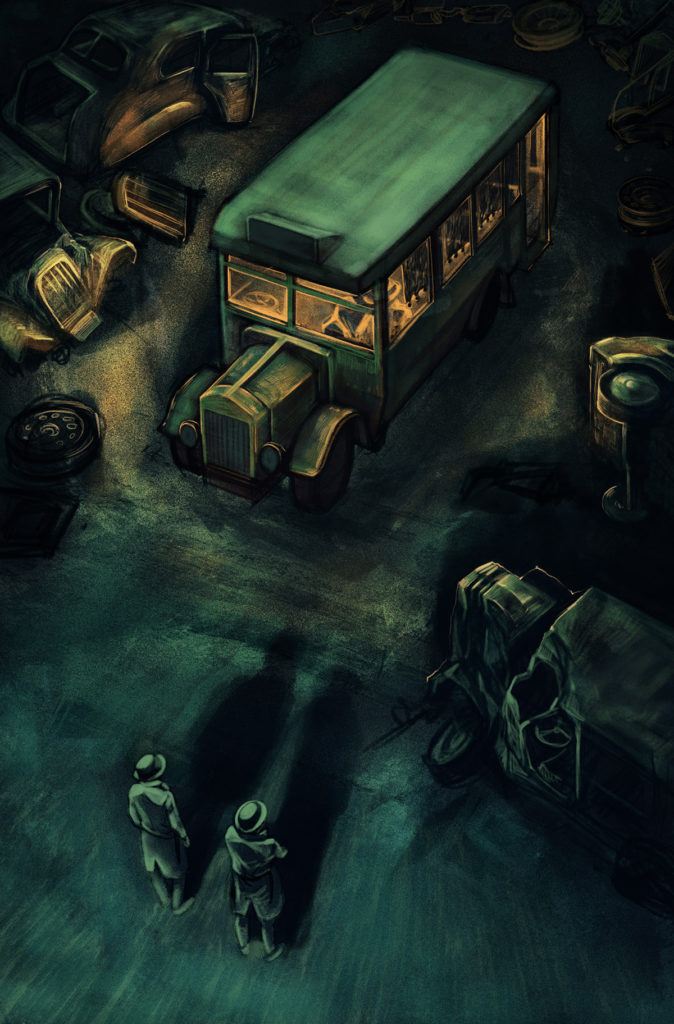 Further on in the book a character boards a London RT. Again it was great to be able to help our illustrator Alexandru Savescu by supplying him with reference photos from the interior of the top deck looking out. Dick told me: 'The normal London bus from the 1940s through to the 1960s/70s was called the "RT" and they were all identical. From the outside you can see that the dividing line across the window (which separated the fixed part at the bottom from upper half which could be wound down for ventilation) was almost exactly in the middle. 'The vertical pillars on each side and at the centre are quite thick, because they support the structure of the roof. The horizontal bar is much thinner - it is really just chrome strips on each (upper and lower) piece of glass, to form frames. Also note that all the outside corners of the window are clearly rounded. 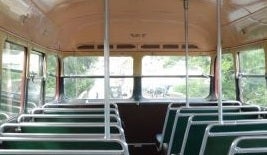 'In the picture above you can see the top half of the window has been wound down (there's a small chrome handle outside-centre to do it). Finally notice that the lower half of the window frame is dark green, and the upper half is cream, like the roof.' And this is just one book! 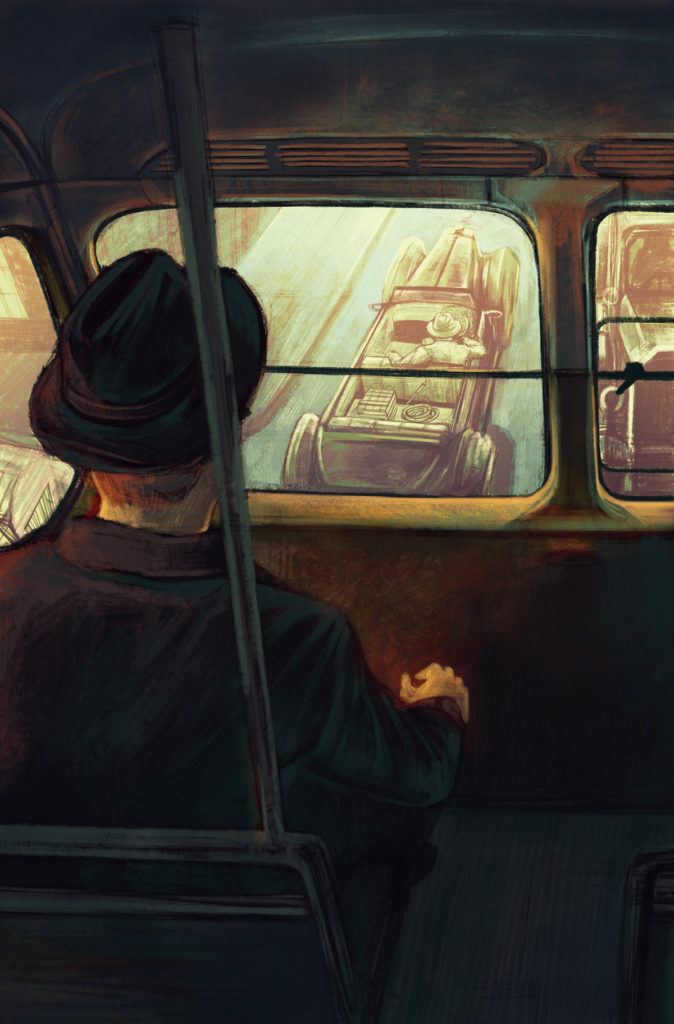 Alexandru’s illustration from Hide My Eyes, from the interior of a London bus. Find out more and order the Folio edition of Hide My Eyes.