Described and Illustrated by the Japanese
Limited to 1,000 hand-numbered copies

One of the most opulent pictorial books ever published, Japan, produced at the end of the 19th century, captures a vanished world in 259 hand-coloured photographs. This is the first time this landmark work has been reproduced in its entirety in two luxurious volumes.

Japan includes over 250 hand-coloured photographs showing buildings and landscapes – Mount Fuji seen from Kashiwabara, cherry blossoms at Koganei, temples and bamboo groves – as well as Japan's inhabitants, including street vendors, calligraphers, geishas and Buddhist monks. The work also features ten full-page collotypes of Japanese flowers and ten art prints. One of the most influential Japanese art historians of the day contributed ten essays on Japanese artworks from different eras and there is additional text explaining Japan to a Western audience. At the end of the 19th century, turning these pages was the next best thing to visiting this mysterious and fascinating country. Japan was often referred to as a ‘sealed book’: now, for the first time, the book was being opened.

A unique record of a vanished world

At the end of the 19th century, a craze for all things Japanese spread over the Western world. After two centuries of self-imposed seclusion, the country had begun to open up to outside eyes, and its art and craftwork were eagerly sought after by collectors and artists. By 1878 ‘Japonisme’ was being described by the writer George Augustus Sala as ‘a sort of religion’.

Because of its links with the tea trade, Boston, Massachusetts was an epicentre of the movement. In the 1890s, the J. B. Millet Company of Boston embarked upon an extraordinary venture: a complete pictorial record of the country, entitled Japan, Described and Illustrated by the Japanese.

Japan is one of the most opulent photographic books ever produced. Over 250 hand-coloured photographs show buildings and landscapes – Mount Fuji seen from Kashiwabara, cherry blossoms at Koganei, temples, bamboo groves, rice fields and bridges – as well as Japan's inhabitants, including street vendors, calligraphers, lantern-makers, farmers, schoolchildren, geishas and Buddhist monks. There is even a picture of an actor representing a samurai warrior. This reproduction, in two luxurious volumes, is the first time this landmark work has been reproduced in its entirety.

Altogether, Japan represented an enterprise of enormous scale and ambition, with an approximate production cost of $200,000 – a staggering sum at the time, equivalent to millions today. As well as obtaining subscriptions in advance from collectors, J. B. Millet received financial backing from the Japanese government. Clearly this was more than simply a beautiful book; it was an important calling-card. Following its recent victory in the Sino-Japanese War, Japan was keen to present itself in the best possible light on the world stage.

To edit Japan, the J. B. Millet company chose Captain Francis Brinkley, an Irish-born soldier who had become an adopted citizen of Japan, even marrying the daughter of a samurai. Brinkley gathered a group of Japanese writers to write a text explaining Japan to Westerners, under headings such as ‘The Early Japanese and Their History’, ‘Creeds and Castes’, ‘Observances and Pastimes’. Most of these writers are not named, and their text was heavily edited to appeal to a Western audience. The result was a book described in the introduction as ‘an ambassador extraordinary sent by the Japanese to the American people’. It remains a fascinating reflection of Japanese-American relations at a pivotal moment in both countries’ history, and one of the most remarkable publishing ventures of the 19th century.

ONE OF THE MOST REMARKABLE PUBLISHING VENTURES OF THE 19TH CENTURY

The creation of these volumes was painstaking and astonishingly labour-intensive. The original photographs, all taken in Japan, were individually printed, washed, fixed, toned, dried, cropped, hand-coloured and pasted onto the page – a process that was repeated thousands of times across the sixteen editions of the book. The photographs were albumen prints created using silver salts suspended in egg white, a more time-consuming process than the gelatine and collodion method that had recently been introduced.

The most distinctive feature of Japan was the hand-colouring of the photographs. This technique had largely been replaced by mechanical colouring, and was already seen as more traditional and prestigious. The Japanese excelled in the hand-colouring of decorative objects such as fans, lanterns and prints, and by the 1880s they were applying this expertise to colouring photographs. It is estimated that a total of 350 individual colourists would have worked for a year on their own part of the work, with each colourist completing, at most, three prints a day.

The work also featured ten full-page collotypes of Japanese flowers by the renowned photographer Ogawa Kazumasa, a pioneer of this type of photomechanical printing. Okakura Kakuzo, director of the Imperial Academy in Tokyo and one of the most influential Japanese art historians of his day, contributed ten short essays focusing on Japanese artworks from different eras. 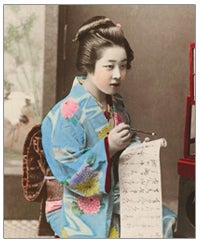