The Book of the New Sun

A signed and numbered limited edition of Gene Wolfe’s award-winning masterpiece of speculative fiction illustrated by Sam Weber and introduced by Neil Gaiman.

The Book of the New Sun

‘A masterpiece. Gene Wolfe is a wizard, a torturer, frightening, delightful. Beware! This is magic stuff!’

A work that subverts, elevates and transcends its genre, this exclusive edition of Gene Wolfe’s epic features a powerful new introduction by Neil Gaiman as well as striking binding designs, decorative initials and haunting illustrations by Sam Weber. Sadly, Gene Wolfe died on 14 April so will not see the final publication. Shortly before his death, he signed the limitation labels for each of the 750 hand-numbered copies. These have also been signed by Neil Gaiman and Sam Weber.

A masterpiece of speculative fiction

‘The books are chests full of wonders; full of images like jewels, of words a reader can get drunk on, of people and incidents that will linger long in memory.’

Severian, a young torturer just learning his trade, makes the mistake of falling in love with one of his victims. Unable to bear the sight of her pain, he offers his love the mercy of a sharp blade, and for this crime he is exiled from his home.

He is ordered to travel to the distant city of Thrax, there to take up the position of Executioner, but the journey will be longer and stranger than he can imagine. On the road Severian finds new friends and enemies and discovers a strange jewel that seems to command power over life and death – a power that others will kill to obtain.

A series of dangerous revelations about his dying world lead Severian to question the very nature of existence, and his own shadowy destiny.

‘Although he lived a long and wonderful and varied life … and left behind a staggering and brilliant literary corpus, the world was a better place with him in it.’

Gene Wolfe’s own definition of a great story was: ‘one that can be read with pleasure by a cultivated reader and reread with increasing pleasure’, and The Book of the New Sun fully encapsulates this vision. It is both an epic novel and a puzzle, a labyrinth that readers gladly lose themselves within again and again, chasing down each clue and revelation. It brims with allusion and playful language, using the archetypes of fantasy and science fiction to tell a deep, complex story – a challenging read, but one that rewards endlessly. Each volume has won awards, including the Nebula, the Locus and the British Fantasy Award; and Wolfe himself was presented with the World Fantasy Award for Life Achievement in 1996.

Award-winning illustrator Sam Weber was the driving force behind this production of The Book of the New Sun. He had already secured a place in Folio history with his fantastic images for Frank Herbert’s Dune, which became one of the most sought-after titles Folio has ever published.

Describing the Book of the New Sun project as ‘a dream come true’, he seized the opportunity to work with writing that was ‘so nuanced, rich and mysterious’. Weber’s enthusiasm is evident in the detail and intimacy of his work, where every component – from the decorative initials to the colour scheme – nods to the complexity of the novel.

The story Wolfe spins was always going to be challenging to capture on the page, yet Weber has crafted a series of images that throw light and shadow onto a haunted world. Using an exquisite blend of the recognisable and the mythic he has achieved the impossible: brought another layer of meaning to this already multi-layered work. 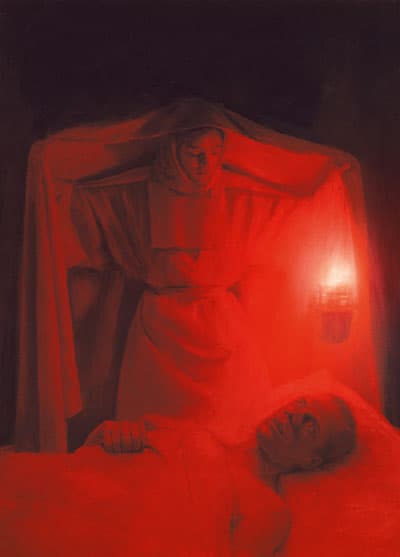 ‘Reading Gene Wolfe is dangerous work. It’s a knife-throwing act, and like all good knife-throwing acts, you may lose fingers, toes, earlobes or eyes in the process. Gene doesn’t mind. Gene is throwing the knives.’

Neil Gaiman is one of modern fantasy’s most celebrated authors, known for reinventing forms as diverse as comics, fairy tales and the Great American Novel. He has described Wolfe as a hero and a friend, formerly recognising him as ‘possibly the finest living American writer’.

For this special limited edition, Gaiman has written an exclusive introduction that examines what makes The Book of the New Sun such a unique work: the layers of meaning, the seductive power of an Earth changed almost beyond recognition. He delves into how the book rewards those who choose to revisit it, challenging them to glean every meaning from each delicious puzzle, and, like a kindly knight sending the hero off on his quest, he also provides a series of guidelines on how to read the book, advising that, with Wolfe, ‘every word matters’.

This remarkable work, often described as ‘the Ulysses of fantasy’, demanded Folio’s most lavish treatment: a fully illustrated limited edition.

Each volume features a striking Sam Weber binding design, printed on a fine cloth to ensure that the details and colours are reproduced to perfection, and the colours employed build as the series progresses. Red foil diamonds have been blocked on the spines to denote the order of the books and the page numbers too are bordered by tiny red diamonds replicating this device. There are 20 different decorative initials, hand-drawn by Sam Weber and printed in red at the start of the chapters, each references an incident or character from the books for the reader to puzzle over. The head and tail bands, end papers and page edges are all in deepest black befitting the tale of a torturer in contrast to the blood red of the limitation label. The labels, each numbered by hand, bear the signatures of Gene Wolfe, Sam Weber and Neil Gaiman and are placed at the front of the first volume in each set.

Sam Weber’s illustrations are fabulous. In 2017 Folio Publishing Director Tom Walker travelled to New York to discuss the project with the illustrator. Weber had suggested The Book of the New Sun as the work he wanted to illustrate and his dedication to the project has been extraordinary. He made models of some of the items in the illustrations so that he could establish how the light would fall on them and employed people to sit for the characters featured. Each volume includes a colour frontispiece and double-page illustration with a further three mono illustrations. All are printed on FSC certified Natural Evolution Ivory paper ensuring that the muted palette and extraordinary detail reproduce perfectly.

The slipcase in which all four volumes are presented is bound in Imperial black cloth and there is a pleasing curve to the top and bottom lips. The sides are blocked with motifs from the work – a rose and the sword Terminus Est – in the palest gold and the box is lined with stunning silver mirrored paper. For this limited edition our editors and designers really have thought of everything and we believe it to be a fitting testament to the work of one of the very greatest writers of science fiction.