London and New York, 40 rare photogravures by a master of the art, in facsimile for the first time.

Two of the greatest metropolises of the early 20th century, each captured in 20 photogravures by the pictorialist genius Alvin Langdon Coburn. These facsimiles of two volumes of luminous and evocative images, first published in 1909 and 1910 respectively, convey the urban beauty of London and New York in the age of steam. The original introduction and foreword, by Hilaire Belloc for London and by H. G. Wells for New York, are included. The facsimiles are accompanied by a separate leaflet featuring a specially commissioned introduction by Geoff Dyer and a new essay by Rut Blees Luxemburg.

Set in Founders Caslon
Printed on Abbey Pure paper, sewn with blue thread and blocked in blue foil on the title page

Alvin Langdon Coburn, who was given his first camera at eight years old, was a perfectionist, an innate craftsman and a compulsive innovator. Mastering with extraordinary facility the complexities of different types of print-making, he held his first one-man shows in New York in 1903 and at London’s Royal Photographic Society in 1906 – in which year, when only 24 years old, he was described by George Bernard Shaw as ‘the greatest photographer in the world’. Together with Alfred Stieglitz and Edward Steichen, Coburn was a leading exponent of pictorialism – ‘Simultaneously a movement, a philosophy, an aesthetic and a style’ – believing that photography could achieve results as aesthetically significant as the other visual arts. He proceeded to learn the photogravure process and himself supervised the printing of every image for his two masterworks, London (1909) and New York (1910).

Posterity will owe much to Mr Coburn ... his record of urban effects will be a greatly valued legacy.

Having taken the photographic world by storm, he then proceeded to bemuse it by a radical shift, producing the world’s first abstract photographs, his ‘vortographs’, in 1916–17. By this time, however, he had become passionately involved in synthetic philosophy, religion and mysticism, beginning a lifelong association with freemasonry. Around 1920, Coburn joined The Universal Order and it is by their kind permission that we have been able to reproduce the photogravures of London and New York. From 1930 Coburn largely abandoned commercial photography; he made his home in North Wales with his wife, Edith, and devoted himself to religious mysticism.

The phenomenal success of Coburn’s 1906 exhibition encouraged him ‘to go prospecting over the bridges and roofs of London, and stalk it from new and startling aspects. The result, and more, is immortalized in his London book, one of the truest and profoundest tributes to our grey metropolis since ... Canaletto or the incomparable Turner.’ (John Philip Collins). Coburn’s London is a great imperial city, and a hub of maritime trade – many of the images are of the river and its bridges – but he was not interested in recording streets, bridges and buildings for their own sake; his purpose was to ‘capture a mood’, and to that end he would wait all day for the perfect moment, a consummation of light, atmosphere and self-expression. Sunlight and its play on water, mist and rain and their dissolving effect on stone and street light held him in thrall.

Right: London: The Tower Bridge. Coburn achieved his most striking results by the use of a telephoto lens to foreshorten the compositions; for example, this image of Tower Bridge was taken (in his words) ‘from the middle of London Bridge, a distance of nearly half a mile, that would have been impossible with anything else. I repeat, London is great!’ 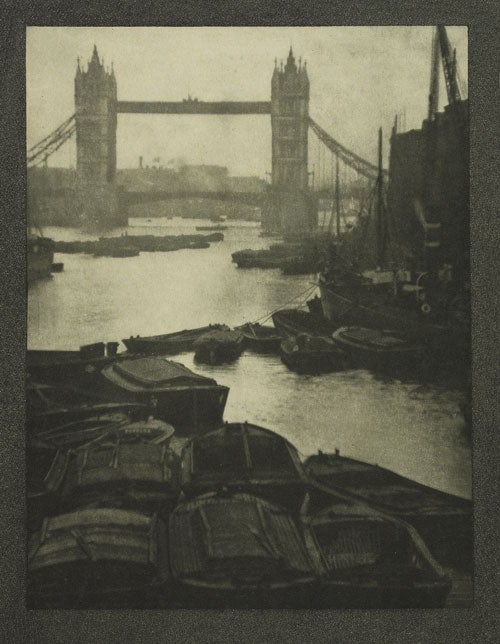 For all Coburn’s love of London, he found New York ‘more striking, more impressive, than every other city on the globe ... with a feeling of great bulk and power. The mass of it makes you realise the energy ... overawes you with its possibilities.’ Coburn was the first major photographer to emphasise the visual potential of elevated viewpoints, a potential already exploited in London but for which New York was an even more fruitful hunting ground, with its early skyscrapers such as the Metropolitan Tower, the Singer Building and the Flat-Iron. Coburn’s New York is a city under construction, and several of the photographs show labourers at work on new edifices, shrouded in steam and smoke. As ever, Coburn’s interest is in the aesthetic impact of the images; their subject matter is subordinate to their design, and in these we see pictorialism giving way to modernism and abstraction.

Left: New York: Brooklyn Bridge, from a Roof-Top. Bridges were a source of infinite fascination to Coburn, who compared the skill of the bridge-builder with that of the photographer, writing: ‘The one uses his brain to fashion a thing of steel girders, a spider’s web of beauty to glisten in the sun, the other blends chemistry and optics with personality in such a way as to produce a lasting impression of a beautiful fragment. The work of both ... owes its existence to man’s hold over nature.’ 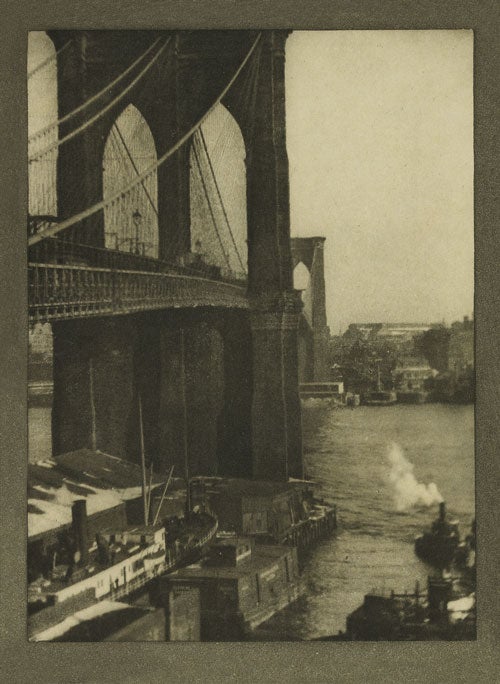 Each volume includes its original introductory matter. Hilaire Belloc gives a succinct overview of London’s history, told at the unassailable height of her imperial heyday, whilst H. G. Wells manifests his appreciation of Coburn’s achievement as well as his own love of ‘the hard, clear vigour of New York’.

A separate commentary booklet contains two pieces packed with insight into Coburn’s creative processes and achievement. The specially commissioned introduction by Geoff Dyer, polymathic author and critic, is followed by an essay by the London-based German photographer Rut Blees Luxemburg, a modern chronicler of urban scenes who, like Coburn, employs long exposures to capture her subjects using only available light.

The Metropolitan Tower
Brooklyn Bridge, from a Roof-Top
The Battery
Williamsburg Bridge
The Holland House
Broadway at Night
Brooklyn Bridge, from the River
The Flat-Iron
The Water Front
The Singer Building, Noon
The Ferry
The Tunnel-Builders
The Knickerbocker Trust Company
The Chinese Quarter
The Unfinished Bridge
The Singer Building, Twilight
The Stock Exchange
Fifth Avenue, from the St Regis
The Sky-Line
The Park Row Building

A multi-award-winning author, Geoff Dyer’s writings on photography include The Ongoing Moment (2005). He is a fellow of the Royal Society of Literature and a member of the American Academy of Arts & Sciences.

London-based German photographer Rut Blees Luxemburg is a contemporary chronicler of urban scenes who, like Coburn, employs long exposures to capture her subjects using only available light. She is an Honorary Fellow of the Royal Photographic Society of Great Britain and Senior Research Fellow at the Royal College of Art.

These two facsimile editions have been reproduced from first editions held at the Bodleian Library at the University of Oxford. In New York, London is described as ‘uniform with this volume’ and our editions match perfectly. Smith Settle, long established printers and binders in Yorkshire, have quarter-bound the cases in smooth brown leather blocked with gold foil. Everything has been completed by hand. The Materica paper sides are also blocked in gold foil, just like the originals.

Inside, the introduction by Hilaire Belloc and the foreword by H. G. Wells, who was a good friend of Coburn, are printed on Canaletto Grana Grossa Bianco paper from Fedrigoni, an Italian company founded in 1888. It has a true felt finish, is enhanced with cotton fibre, meets the mark of responsible forestry and is acid free.

When we published The Door in the Wall, illustrated with photogravures by Alvin Langdon Coburn, much time was spent establishing the very best paper on which to reproduce the photogravures. Tatami was selected and was so successful that it has been chosen again for this publication. Award-winning printers Pureprint in East Sussex were carefully selected for this part of the facsimile process. Geoff Dyer, in his introduction, describes the photographs as ‘daylight nocturnes’, and the atmosphere and mood of London at the height of its imperial power and of New York on the threshold of modernity has certainly been captured in these reproductions.

Back at Smith Settle, the photographs, which vary hugely in size and shape and are all positioned slightly differently on the page, were hand-tipped onto a heavy Materica paper, also from Fedrigoni, in a masterly copy of the original.

The first editions were protected by dust-jackets, with the titles printed in a stunning blue. We simply would not contemplate covering the beautiful leather spines with dust-jackets, but have used the same gorgeous blue both for the foil blocking on the title page of the commentary leaflet and for the thread.

The same blue was chosen for the foil blocking on the slipcase, again covered in Materica paper and handmade by Smith Settle, with a delicate curve to facilitate removal of the books.