Defying all genres, In Parenthesis is one of the First World War’s greatest works of literature. This edition includes artwork by calligrapher Ewan Clayton and a foreword by Harold Bloom.

In Parenthesis tells, in the slang-vernacular of ordinary soldiers, the story of Private John Ball and his comrades as they travel from England to the Front, a journey that culminates in the assault on Mametz Wood in the Battle of the Somme in July 1916. Through his characters, Jones shares with us his own experiences, but he also harkens back to a time before his own – to the remote, shared heritage held by ancient myth. And so parade-ground oaths are fused with moments of mythic beauty, influenced by Arthurian legend, Shakespeare, The Song of Roland and notably the 6th-century epic Y Gododdin, which commemorates a doomed raid by Welsh soldiers into English border country.

‘For us amateur soldiers ... the war itself was a parenthesis – how glad we thought we were to step outside its brackets at the end of ’18.’ Here David Jones alludes to the curious, if welcome, disconnect felt by those who were plucked from their normal lives to fight in the First World War. But he refers also to the ‘space’ between his own experience as an infantryman and the work it inspired: it was not until 1937, after almost ten years of writing, that he published his remarkable In Parenthesis.

This ‘space’ makes his work distinct from that of poets who wrote during or immediately after the war. Jones turned initially to painting and engraving. Though he excelled at both, this was but the beginning of a long search for a form of expression. The result was something extraordinarily innovative: neither poem nor novel, In Parenthesis interweaves the qualities of each. In tune with the linguistic daring of the modernists, it was lauded by T. S. Eliot, whose introduction is included in this edition, as ‘a work of literary art which uses the language in a new way’.

‘A work of genius’

Calligrapher Ewan Clayton discusses his astonishing work on our new edition of David Jones’s In Parenthesis, one of the First World War’s most celebrated works of literature.

Alongside Jones’s original frontispiece, this edition contains artwork by calligrapher Ewan Clayton, MBE, the last working member of the Guild of St Joseph and St Dominic founded by Eric Gill in Sussex, of which Jones was also a member. In Clayton’s words, ‘It is important that the lettering lies there quietly on the page; that it is beautiful, but not noisy.’ His binding design features the poem’s Welsh subtitle, taken from Y Gododdin: ‘His sword rang in mothers’ heads.’ The edition also includes Jones’s own notes, as well as the original introduction by T. S. Eliot and a new foreword by Harold Bloom, one of the most eminent literary critics of our time. In it, he recalls his own meeting with Jones in the 1960s, and describes the closing incantations of In Parenthesis as ‘sublime’.

In the illustration to the right, Clayton styles phrases from Jones’s dedication to reflect the sentiments it conveys. Jones writes of the ‘shared … pains’ of all those who fought, and the mischance which saw them pitted against one another. Here, two key phrases are interwoven, as were the experiences of each and every soldier: ‘for my friends’ and ‘by misadventure’. 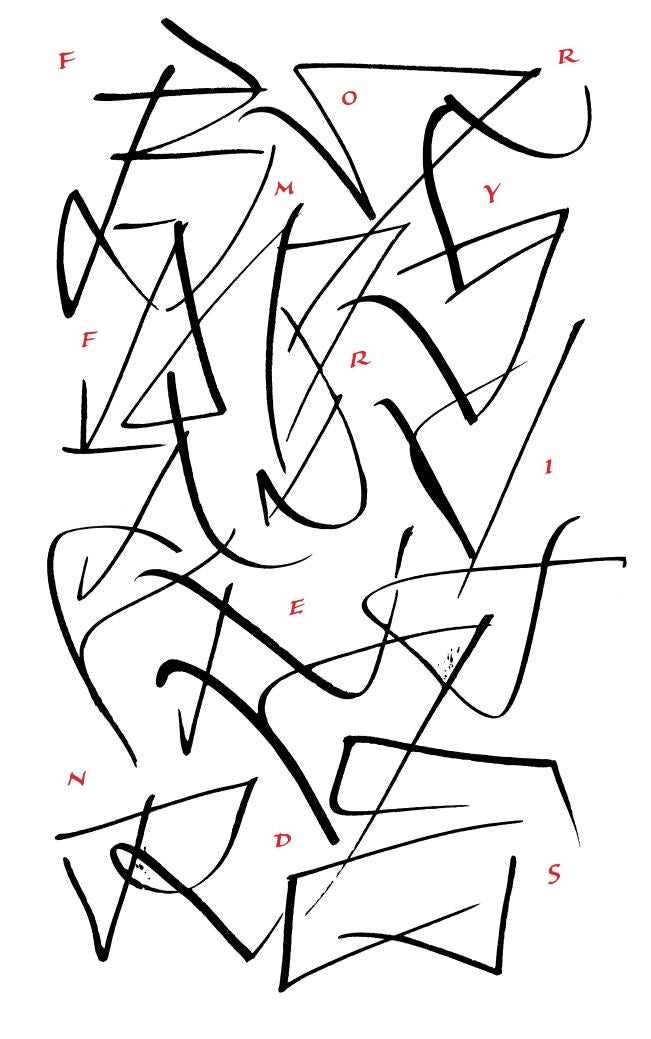 ‘It puzzles me sometimes that the carnage of World War I, in which a British generation of young men was uselessly destroyed, produced a higher order of poetry than did World War II. Only Keith Douglas recaptured the imaginative splendor of Isaac Rosenberg, Ivor Gurney, Robert Graves, Edward Thomas, Wilfred Owen and David Jones. Jones had a Welsh father, with whom he identified, and Welsh literature fascinated him. But he told me that he could not master the language, and my learned Welsh friends always express doubt that his references manifest deep understanding. But that only suggests to me that strong poets need not be scholars (though there was Milton, and have been a few more). Jones turned to Welsh literature and myth to help meet his imaginative needs, and found answering voices more often than not.’

An extract from Harold Bloom’s introduction