Folio had been keen to create a Folio Society Velveteen Rabbit for a while – but how best to shape a stand-out edition of this childhood favourite? The answer lay with inspiration from the very first editions and the original classic artwork, and so we set out to investigate them. Sophie Lewis, Managing Editor 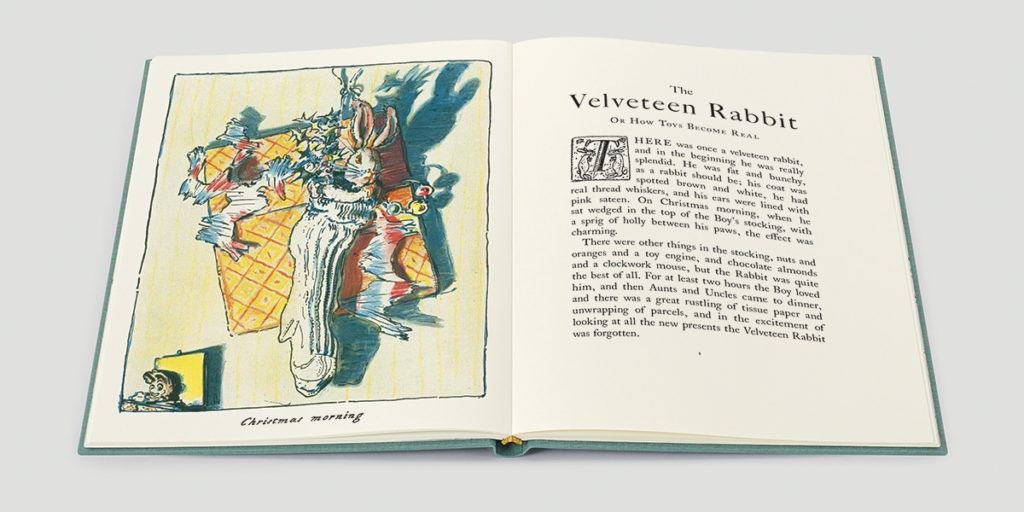 William Nicholson’s grandson Desmond Banks lives in West London, in a bohemian, countrified semi-hidden townhouse where the doorbell asks you to ‘press hard’ (but didn’t work most of the times I visited). I went to see him not primarily in the spirit of literary-artistic pilgrimage but because he is, until the end of 2019, copyright holder to his grandfather’s books and illustrations. Nicholson was a prolific painter and illustrator. Among his works are famous portraits of Queen Victoria, Gladstone, Kipling and Sarah Bernhardt, series depicting ‘London Types’ and familiar animals, children’s books that he wrote and illustrated, including The Pirate Twins and Clever Bill, and others that he illustrated with other authors - including The Velveteen Rabbit, his inspired collaboration with Margery Williams. It was The Velveteen Rabbit that took me out of the Folio office, to ‘press hard’ at that door and sit down with Desmond. Excited by our production director’s photos of first editions in the New York Public Library, I was hoping to find a first edition or two in Banks’s office – something to form the basis of our projected new Folio edition of The Velveteen Rabbit. Our intention was to create a book that would be a facsimile inside, from the title page right through to last tear-jerking words, and the most beautiful gifting edition on the outside: in fact the loveliest edition of this children’s classic ever made. It turned out that Desmond had more than one first edition in his loft. Having climbed past Nicholson portraits and lithographs all the way up the staircase and along every landing, when we finally reached Desmond’s office at the top of the house, Folio production manager Julie Farquhar and I perched inside the small space and Desmond began to pull Rabbits out. One first edition, well-read but sturdy – and then another: Nicholson’s own daughter Penny’s copy, with a hand-pencilled dedication to her on the page facing the title. 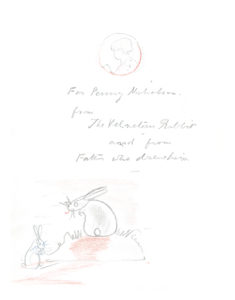 We could not ignore how special this felt. The soft graphite and pink pencil lines facing the printed page achieved that magic of telescoping time, bringing us a hint of the father’s pride in his work and his pleasure in passing the finished piece to his daughter. We had no choice but to include a meticulous reproduction of that dedication in our edition, a unique tribute to Nicholson’s spontaneous skill and wit. Desmond had more than the published books, however. In addition to these, he was able to show us an assortment of publisher’s proofs and even four of the original paintings from which the illustrations were first printed. We examined these in delight and photographed them. At first we had thought we would go back to these original pieces for our edition, leaving behind the whole of the book’s chequered publishing history, including garish and flimsy ’70s and ’80s editions – Desmond exhibited the worst offenders – paperbacks in which the blues and greens of the illustrations were somehow washed out, leaving orange-hued images that Nicholson would have described as ‘poisonous’. There had been some unfortunate editions, particularly with respect to the reproduction of Nicholson’s artwork. But when we saw the originals, we realised that these were now too faded for us to work with. They could no longer do justice to Nicholson’s original vision. 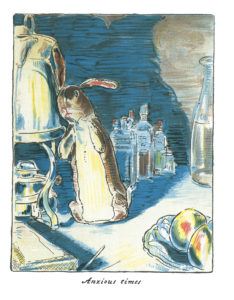 What’s more, the set was incomplete. We couldn’t reproduce some originals and take the remaining illustrations from other sources – we had to find a single source for the whole set. In the end we decided to return to Penny Nicholson’s copy. This first edition became the basis for our own. 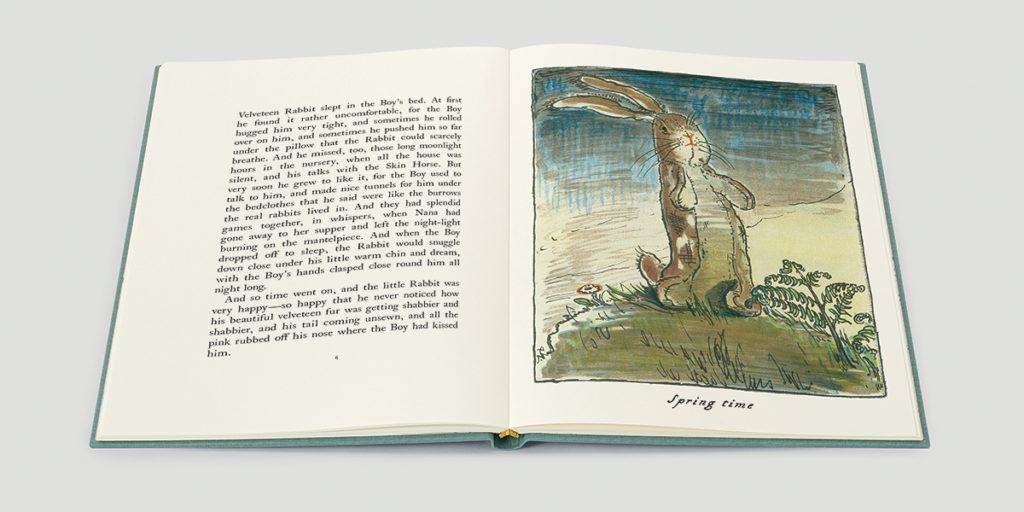 If you look inside your copy of Folio’s The Velveteen Rabbit, you will see that actually there is more inside than the promised facsimile reproduction of Penny’s book. Following Desmond’s recommendations, I commissioned two further elements: a foreword and an afterword. First the afterword: Marilynn Strasser Olson is an expert on children’s literature and the art that, with luck, goes with it. Author of Children’s Culture and the Avant-Garde, in which she devotes a chapter to Nicholson’s art for children’s books, she was the perfect person to provide a passionate analysis of the magic that unfolds through The Velveteen Rabbit  - and which in fact the story explains while simultaneously demonstrating it. In locating and describing that magic, Strasser Olson allows us to think beyond this Rabbit to all the other beloved books and toys where the same kind of magic has happened for us. Which brings me to the foreword: Shirley Hughes is an author with immediate and extensive experience of this magic from the inside. The creator of Dogger and the much-loved Alfie books, Hughes also happens to live ten minutes from Desmond’s house and was able to join us on one of our visits to see Nicholson’s books and artwork. She turned out to be a keen fan of Nicholson’s art, with small original canvases of his in cherished places in her own home. She was delighted and dazzled at being taken to a house full of Nicholson, exhorting us to slow down and take due time to appreciate every piece as we worked our way up to the loft again. Her foreword too celebrates his art, in the context of its value for young readers. Just as she helped us slow down to absorb it all at a fair and human pace, so, she hopes, do the depth and intensity of Nicholson’s images help children to slow down and absorb their story. 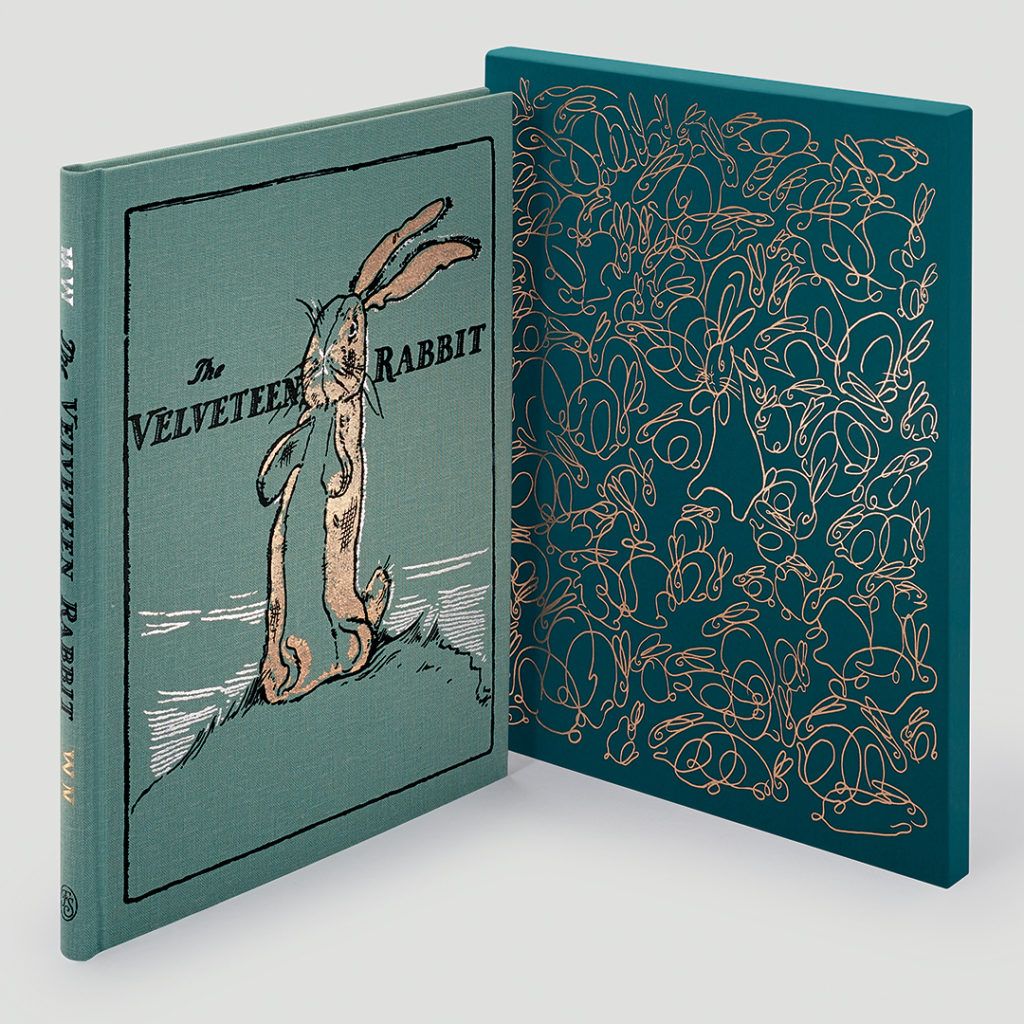 Find out more and order The Velveteen Rabbit.